It has certainly been an amazing time learning, playing, and working our way North.  We have been neglecting our blog, while we get other projects such as our charity off the ground.  (More to come on Sunrise Sailing SOON).  So instead of a posts on each of our last few Ports, here are some of the highlights. 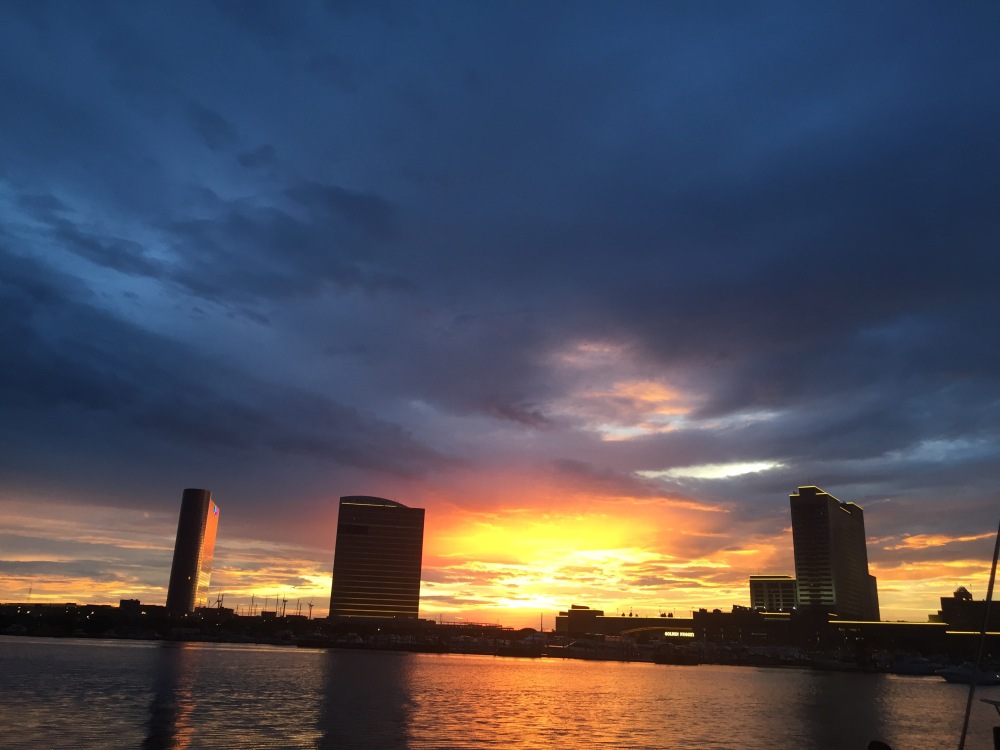 Where we stayed: Kammerman’s Marina- A family owned marina that has made customer satisfaction a top priority. We enjoy our stay so much, a few nights turned into a week.  Kammerman’s is the only marina we will be staying at in AC.

What we ate: Gilchrist in Gardener’s Basin is a great place for breakfast. The blueberry pancakes were so good we went twice. We normally try to go to local establishments, but we couldn’t pass up The Melting Pot. Our waiter Jorge was incredible and made our meal unique.  TIP: All song played while dining at The Melting Pot are two minutes long, exactly the cooking time of most of the fondue.

We headed to Ernest and Sons Meats to get provisions. It’s a cruiser dream, we got everything on our list cheaper than the grocery store. The staff was super friendly and helpful.

What we did:  Kammerman’s has bikes, which are a perfect way to see Gardener’s Basin. It’s a fun area with shopping, bars, restaurants, and the aquarium. We escaped the heat of the boardwalk, ducking in and out of casinos. Many nights we sat in the cockpit enjoying the live music from the Golden Nugget Casino, without the crowd at the Farley State Marina. 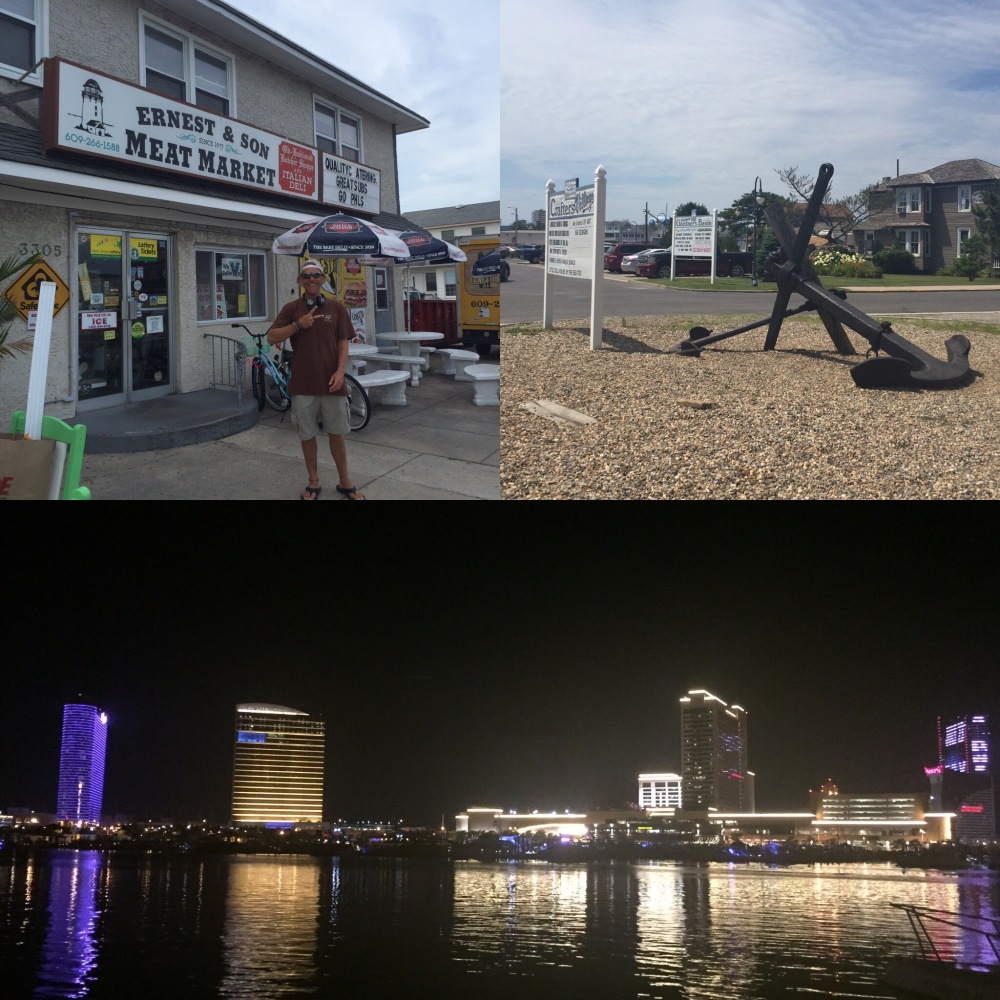 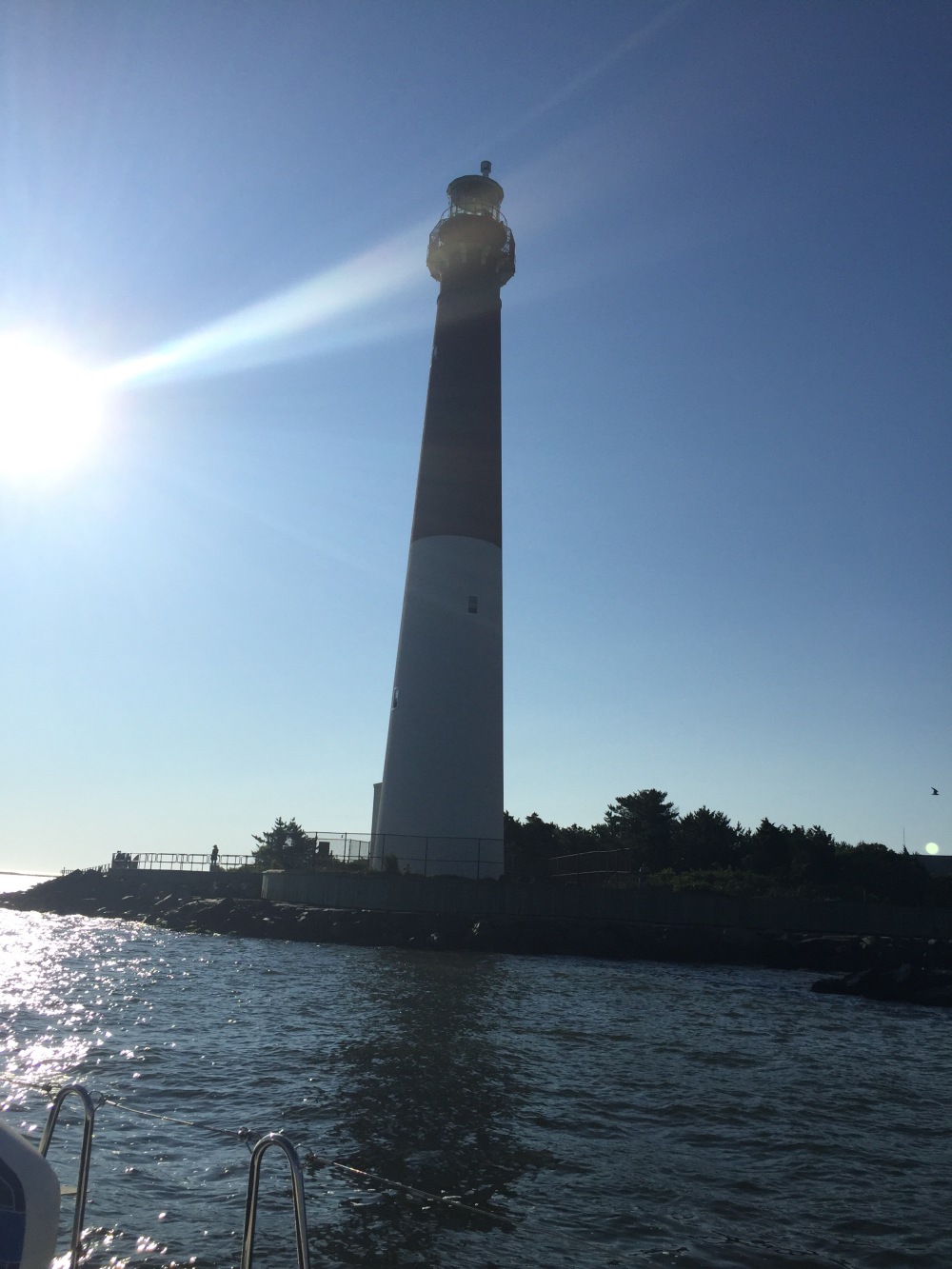 Where we stayed: We anchored at Barnaget for 2 nights waiting on weather. Many sailors say they won’t enter because of the very challenging and changing shoals, rips, obstructions, wrecks, and the fact that accurate charts of the channel do not exist, due to the constant movement of navigational markers.

Captain VooDoo’s NAVIGATIONAL TIP: The majority of the shoaling was located on the South side of the channel, on the day I passed thru.  (WARNING:  The markers move, REGULARLY.  FOLLOW YOUR MARKERS).  It looks a bit “snug” hooking South around the lighthouse, and it is.  Despite a following tide and inbound current, we found ourselves pushing a 4kn flow around the lighthouse.  This slowed us to  a speed of 2.7kn in a tight channel  and swirling current.

The channel markers are moved by “locals” on a regular basis, to mark the moving shoals in the channel.  We hit the channel in a stern 15kn following wing, gusting to 23kn, and an inbound current.  We rode (See: Mr. Toads Wild Ride) in at almost 14kts with following 10′-12′ rollers.  BE AWARE:  Follow the markers.  If the weather, tide, current, or your internal Captain Voice screams “Bad Idea”, call the Barnegat Station Coast Guard or Barnegat Sea Tow.  Due to the somewhat “intimidating” channel, the CG or Sea Tow will come out and escort you in, free of charge.

The channel was  well marked thru the jetty,  but a tough channel to the anchorage follows.  We saw five boats run hard aground, in one afternoon.  Since they all were stuck on the bar, they waited patiently for the tide to rise.  They all grounded on a well marked, charted sandbar NE of our anchorage. This sandbar is a killer.  It lies directly in the center of the harbor, and at low tide, has a depth of 6″.  At high tide, it looks like an inviting crossing.  BE WARNED!

There was a beautiful beach near the anchorage, and that’s as far as we made it onshore.  Do not expect to re-commission  your ocean vessel in this port.  You will not find what you need.  Captain VooDoo OUT.

Both boats below are stuck in 6 inches. 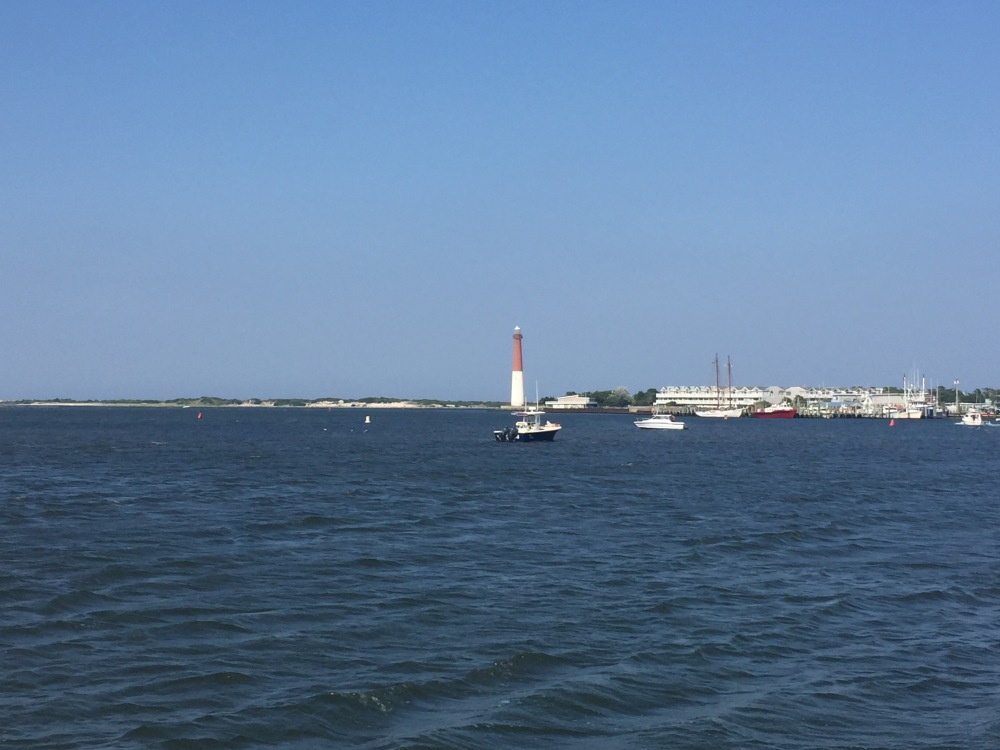 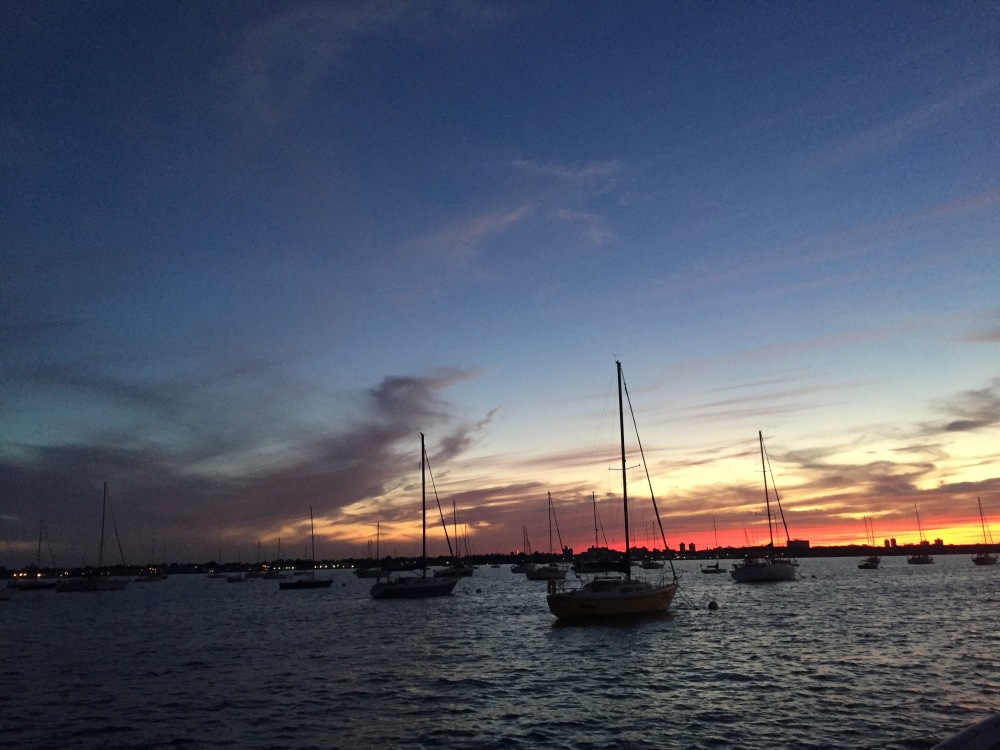 Where we stayed: After many nights on the hook we decided to pick up a mooring at the City Island Yacht Club.  The launch service was prompt and a great resources.  We added an extra night and got our bottom cleaned by Barnacle Busters, adding 1kn to our speed.

What we ate: We celebrated our Anniversary  at Artie’s Steak and Seafood. The food was delicious!!  While in THE BRONX, we also had lunch and milkshakes at City Island Diner, superb for those without the regular “Cheeseburger Fix”.  If you need supplies, grocery, or alternate accommodations,  this is a wise stop, and just outside The East River.﻿

What we did: The launch driver suggested to escape the heat at the Pelham Cemetary overlooking the East Harbor and Hart Island. We hoped to go to the City Island Nautical Museum but it’s closed during the week. 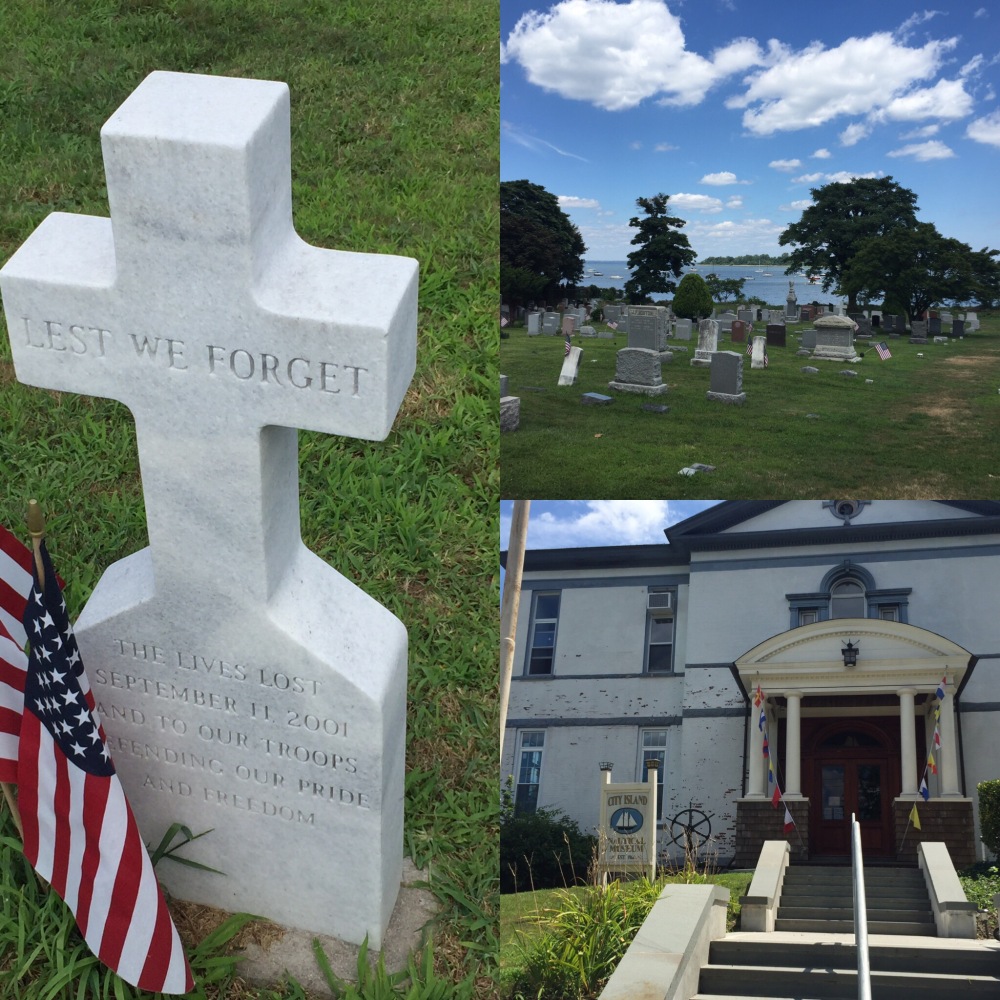 Coming Soon: The East River through Hell’s Gate and The Abandoned Islands of NYC!!!

4 thoughts on “AC to The LI Sound”